The Threat to our Ecosystem – The Ecocide of the Olive Industry

The spring of Los Molinos del Río Aguas is of great ecological importance because it serves as habitat for rare wild species to thrive in the stream and surrounding areas. The presence of constant water flow in this arid region and the rich formations of gypsum make the Natural Park of Sorbas a unique and valuable ecosystem in Europe.

The over-exploitation of the spring of the Río Aguas to water more than 3000 hectares of olive trees has caused a significant reduction in the flow of the stream from 40L/s to 3L/s in just the last few years. José María Calaforra, a professor at the University of Almería in the Biology and Geology Department, estimates that the spring will dry up in six to eighteen months if the extraction of water continues at this rate.

The population’s increasing water consumption as well as the pumping of many wells for watering is modifying the natural flow of the subterranean waters and changing the way that it reaches the spring in Los Molinos. In the Hydrological Plan for Andalusian Mediterranean Watersheds, elaborated by the Junta de Andalucía in 2008, it is already estimated that the extractions are triple the available resources of the spring, and now the over-exploitation is much greater due to the increasing monoculture of olive trees.

In July 2014, Ecologists in Action and the Mediterranean Ecologist Group made a request to the Consejería de Medio Ambiente of the Junta de Andalucía for detailed information about the state of the aquifer including the exact number and depth of the wells. They also requested that immediate action be taken to prevent a major deterioration of the aquifer, but there was no response from the Consejería. In September, the Mediterranean Ecologist Group went to court against the responsible promoter of the 600,000 olive tree monoculture in the Tabernas area, alleging that the plantation was a criminal infraction.

International associations such as Rights of Nature and End Ecocide are giving visibility to this problem on a European scale in order for the provincial administration to take the necessary actions to stop the over-exploitation of the aquifer and save the valuable ecosystems that depend on the Molinos del Río Aguas spring.

Recent articles in the Spanish newspapers: 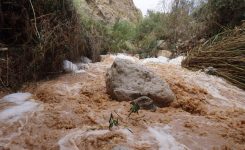