Ecocide Update: news from the EU

Our village has now been facing water supply issues for a couple of years, due to the over-exploitation of the aquifer by the olive industry. The precious water from the Río Aguas is being drained in order to water 3000 hectares of intensive olive tree plantations and now a whole and unique ecosystem in the only semi-desert region of Europe is threatened. The main immediate consequence is that we will probably soon get short of water – the villages of Los Perales and La Herreria are already struggling. But even worse than the lack of water alone, it’s that a whole ecosystem is threatened.

The concept of ‘ecocide’ refers to the destruction of ecosystems of a given territory. After a first attempt by a group of concerned locals to bring the case to the local authorities, the next move was to try to get more attention from the international level. A lawsuit was both sent to the UN and the European Union. After many attempts to bring the case to the court, we have finally received a positive answer from the European Union which has agreed to look into the case. The E.U parliament has requested the E.U Commission to conduct a preliminary investigation, which will now need to start to collect further information about the ecocide in order to launch the legal proceedings.

We’ve been involved in several initiatives to help raise the profile of this urgent issue, including an exhibition and film showing in Almeria, and welcoming EU political representatives to the Rio Aguas to demonstrate the scale of the crisis.

In the meantime, local authorities have come up with a proposal to provide desalinated water to compensate for the lack of water. Nevertheless, this solution will never bring back the precious, fragile ecosystem of the Rio de Aguas.

Don’t hesitate to support us by signing the online petition!

September in the Gardens

September in the Gardens

Seminar on how we can make natural toothpaste

Seminar on how we can make natural toothpaste 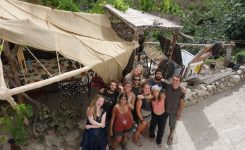 What's the best thing about working at Sunsee...